Part of the listed Farmhouse at Crackaway Barton dates from late medieval times although the settlement was mentioned earlier in the Doomsday Book. An extension added during the 18th century is noted with a date plaque on the Farmhouse wall inscribed “John Foss of Ilfordcombe 1732” 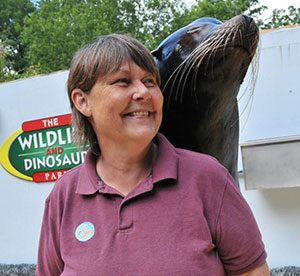 Sally- we all miss you!

Sally grew up in Australia, but came to the UK in the early 1980’s returning to the London area that her parents had left in the 1960’s.

Being a very talented person and enjoying art and DIY she became a Sculptor. She soon formed her own business making scenery for films and displays for shop windows including Harrods.
Sally and her family moved to North Devon in the summer of 2002. She had a vision and bought a farmhouse, a group of redundant farm buildings and land. She then transformed them into a self-catering holiday complex. Dune Cottage Holidays, as we all know it, became a reality.
Over the years as the conversion of the barns into cottages happened and opened to the public she added the play area, introduced animal feeding for the guests and offered craft lessons in one of the barns.

Many guests became great friends returning year after year. Her warmth and personality together with a chance for people to experience peace and quiet in the idyllic countryside of North Devon had great appeal to so many.

The loss of Sally at a young age was a great shock but whilst she is missed terribly, those who knew her treasure individual memories and remember the many good times at Dune Cottage Holidays.

Her family now run the business, continuing the work that she started almost 20 years ago.
Sally – we all miss you!

William Stanbury took over the Farm in 1896 and up until June 2002 the Farmhouse, courtyard and its buildings were still being farmed by the same family, his grand daughter Ruby Ayre and her husband Terence. In fact the Ayre family still farm and manage the adjoining land and buildings.